I just wanted to add a weekly audit to a control. As far as I see this would only be possible in setting 52 dates? In my opinion it would be nice to have such an option (similar to a recurring outlook calendar entry e.g. every Monday etc). But not sure how often this would be used. It’s rather a processual control and not a “classical” GRC control. I wonder if others have the same need?

In the end I just put a monthly audit and will summarise there the 4 - 5 weekly checks made. So it works as well, but would really be nice to have.

As far as I see this would only be possible in setting 52 dates?

yes, and is absurd … i’ve seen a lot of automated testing were audit records are generated in daily bases…eramba needs a smarter way to define this calendar events - something like a calendar.

there is also an issue with leap years (found out by a customer in norway)… i’ll issue this and we’ll try to make it for the short term roadmap.

That is an great idea. Right now it seems when we want to have a change about our maintenance or audit, we have to delete or edit them one by one for the set date plus that changed the audit as failed right away (Maybe not the case with new V2 but I did not test it yet)

it actually is on the roadmap, but long term … i htink we’ll change that a little bit:

Yes, this is an important one for us. Would absolutely love to see it move to more of a near-term release.
Would like to be able to schedule recurring items on either a weekly, monthly, quarterly, or annual basis.

I’ll try to document the feature a bit more and we’ll see what we can do about it, currently audits and manteinances are scheduled by defining static dates:

This has a few problems:

In Google Calendars the configuration for repeating events when selecting “Weeks” is as shown below, you can choose the starting day of the week. 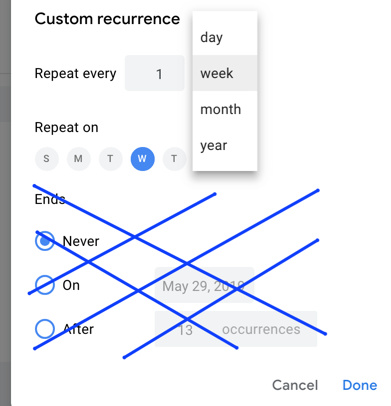 And when you select a month you can choose the day of the month, interesting today 27th Feb as you can see google does not allow me to choose 28th Feb…not sure why. 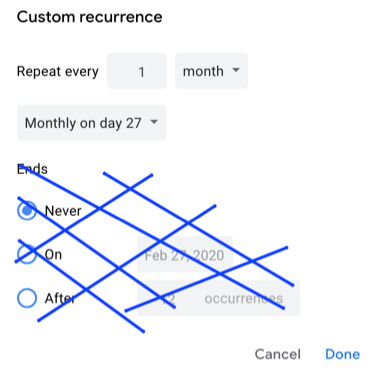 When a user defines something they need to have a “Preview Dates” were we can tell them:

Now what happens for those that have dates randomly choose? We need to give them the option to continue as they are … so basically we have two methods, one with “Fixed Dates” and another with “Calendar” dates.

Not sure how to work that out from a UX perspective but it must be clear which one is active (as only one of them can be active). 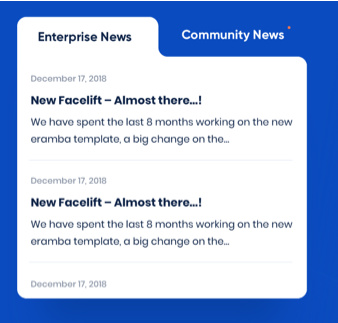 something like the image above? Suggestions anyone on the stuff described here?

I think this approach would do fairly well and is a step up from where we’re at. The visualization makes sense to me on the either/or.

When we’re working with our clients, we don’t describe or implement controls based upon a static day being put into the system - we describe them as ad-hoc, daily, weekly, monthly, quarterly, semi-annually and annually. However, with those periods we have flexibility as to when they can be executed. In theory, an annual control could be performed at any point during the year even though it’s preferable to perform it around the same time each year. Same goes for the other frequencies - the urgency is to execute it during the window and not get as hung up on the actual scheduled date (but at the same time, have notifications/feet to the fire for those that are in danger of missing it).